The devastation in Kerala has been a great leveller

Every cloud has a silver lining. For flood-battered Kerala, there’s still a ray of hope. It’s reinventing the spirits of social engagement and sacrifice in a society that had embraced the paths of materialistic pursuit and crass commercialism with rare zeal in recent decades.

The huge flow of money from the Gulf in recent decades, along with a host of socio-economic and political changes within the country globally had changed the mindset of the society from being socially committed to a self-centered one. The floods and the perils that the season sowed were a taming, chastening experience to the Malayalis. The grim situation opened up enormous human possibilities for collective, selfless action. Good Samaritans were there everywhere, saving victims from the jaws of death, setting up relief camps, and reaching food and clothes to those who found themselves homeless in the huge impact of the floods. Kerala reinvented itself. 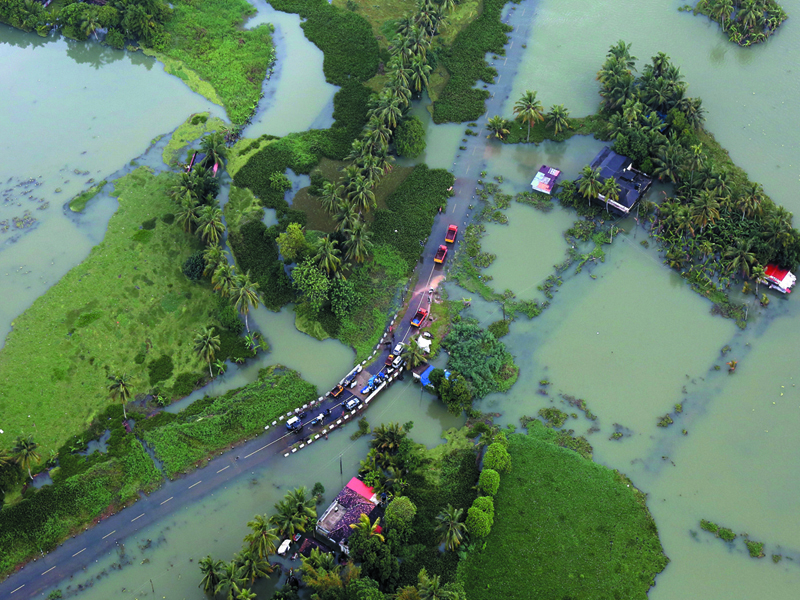 Many were seen going all out to help the needy by even risking own lives. Help poured in just like floodwater from all corners.

On one side, the gushing waters were sweeping away the compound walls of palatial bungalows, which had become symbols of atomized, self-centered existence of significant sections of neo-riche Malayalis. On the other, all forms of hierarchies and barriers like class, caste, and religion got washed away for now. Here now was a critical situation. The state was witnessing the presence of a new collaborative, altruistic set of citizens. Confronted with the gigantic might of water, an elemental force of nature, people energetically engaged themselves in handholding endeavors to provide relief to the flood victims.

Extensive stories of the rescue operations carried out by the fishermen, who dared themselves into flooded areas, are now available in the public domain. They were engaged in rescue operations with indomitable courage, leveraging on the enormous experience they have in battling the seawater. 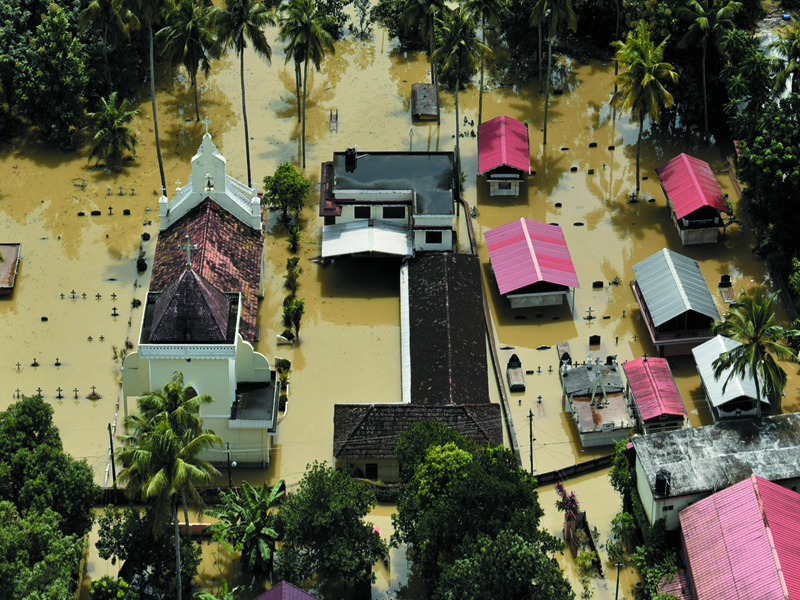 Help poured in without asking. The instances of a girl student donating the land she inherited from her father, another girl offering the money she had saved to buy a bicycle and the inmates of an old age home in Thrissur contributing Rs 50,000 to the relief fund, were just a few examples that will be scripted in golden letters.

Impressively, what Kerala witnessed was the voluntary participation of hundreds of thousands of youths in relief and rescue operations. The manpower they provided made a big change to the scenario. The tech-savvy among them deployed their networking skills to quickly mobilise funds, materials and manpower from across the globe. Even the punky sections, who were otherwise dubbed as ‘anti-socials’ by conservative sections of the society, were seen making yeomen contributions

Interestingly, they were not even keen for an acknowledgment or any `quid pro quo’ from the rescued people. Several rescued people were saying their rescuers were not even willing to share their phone numbers, saying “we can save one or two others by in that interval .’’

The most telling humanitarian gesture during the flood rescue scene was from fisherman KP Jaisal of Thanur who stooped to enable a group of women step on his body and get into his rescue boat from the knee-deep water. “A little of strain on my part to the needy,” was how he explained his action to the media. Or, one small step for [a] man, one giant leap for mankind, as Space explorer Neil Armstrong had put it.

Kerala is a land which always cherished the dream of an equitable and just society. Even the theme song of the state’s national festival Onam encapsulates this dream “Maveli Nadu Vazhum Kalam Manusharellarum Onnnupole, Kallvumilla, Chathiyumilla….’’ (when the mythical ruler Maveli was ruling this country, all humans were treated as equals; there were no thefts and deceits’’).

Nobel Laurate Amartya Sen had hailed the contributions of the public by way of voluntarism in the globally acclaimed Kerala model of development, recalls economist Prof K P Kannan. Though praises are showered on the fishermen for their rescue operations, only a few seem aware that their social consciousness was the natural culmination of the series of struggles and interventions not just for issues like rise in their wages, but also for larger causes like conservation of fishery resources and environmental protection.

The social reform movements led by great personalities of the past had made pioneering contributions in fighting various forms of discriminations and social taboos in the society, recalls historian Prof T R Venugopalan. These reform movements had also played prominent roles in the spread of literacy and reading habits. The interventions of the Christian missionaries had been significant milestones in the process of improving the educational and health standards of the people, though their primary objective might have been proselytization. The trade unions formed under the red shade and the library movement had also helped in the spread of progressive thought and literacy in the society, Prof Kannan said.

The ethos of a just and equitable social order spread by these movements sowed the seeds for the formation of the Congress Socialist Party and still later the Communist party. The struggles and interventions of these movements at various levels culminated in the historic land reforms. Interestingly, the Gulf migration possibilities also opened up around that time. Both the land reforms and the Gulf migration had acted as great socio-economic levelers in the early phase of the state, s. At least some of the tillers who became landowners following the land reforms could pledge their newly acquired land to mobilize funds for Gulf migration in search of job opportunities, recalls S Irudaya Rajan , from the Centre for Development Studies (CDS).

The Gulf migration was a game changer for Kerala, when the state facing acute poverty in the late 1960s and early 1970s, says former planning board member Prof B A Prakash. The state was waiting for the American wheat being imported under the US Public Law (PL) 480. The now elderly would recall with shudder the days when even tapioca and jackfruit were being stolen by many to fill their stomach, points out economist Prof K K George . The poverty level in Kerala was among the worst in the country with about 72.58 per cent of the people being below the poverty line in the mid-1960s. It came down to 11.3 per cent in 2011-12, as official records would vouch for, says K S Hari of Gokhale Institute of Politics and Economics, Pune. Gulf migration had contributed significantly, along with several other factors, in the evolution of a prosperous Kerala.

Ironically, Kerala since the 1970s was also shedding its image of an equitable society, and witnessing a rise in disparity, Prof George said. Kerala’s “Gini coefficient’’, a criterion used by social scientists to measure inequality in a society, is known to have doubled during the last decade. A host of factors including the change in the character of the migration, from distress migration to skilled migration, had contributed to the rise in the disparity levels, which is a sure recipe for social unrest”, Prof George said.

In fact, the social movements and the political formations that stemmed from them had been on the road to a decadence from the mid-1960s. Slowly but steadily, most of them have turned themselves into mere rent-seeking groups, Prof Kannan said. Even the much-hailed land reforms had become mirage. The original expectation of the first EMS government was to acquire and redistribute 7,20,000 acres of land. In reality, by 1991, the government could acquire only 93,178 acres of land. Up until 1995, the government redistributed only 64,237 acres, Hari said. The Dalits were practically left out in land redistribution programme.

The upwardly mobile sections among the Malayalis got disillusioned with the Socialistic ideals after the collapse of the Soviet Union and Communist dispensations in the East European countries since the 1980s. Even the Naxalite movement and similar outfits that were trying to fight for the causes of the marginalized sections of the society, like the tribals and Dalits, and sought to uphold the spirit of sacrifice, got fragmented by then.

The invasion of the neo-liberal policies around the period provided the ambience for Keralites to shed even the perceived commitment they had towards the ideals of equality, justice and sustainability. Self-aggrandizement and short-term gains became for them an obsession. Money was thought of as the sole guarantor of happiness, prestige and power. The concept that ‘end justifies the means’ gained acceptance in matters of wealth creation. The prevailing view is, “We can be on our own, why bother about our neighbours’ worries?” , says Prof George. Social commitment that was so dear a theme in the post-Independence era seemed lost forever.

The avenues of finance capital like speculative market and real estate trade reinforced the faith in the easy-money concept. Religious fundamentalism was emerging as the alternative mode of expression, in place of the ideals of dedication and sacrifice for an equitable and just society, in the post-Soviet Union era, said writer C R Parameswaran. The sections of people who had met their first set of hierarchical needs of food, clothes and shelter were craving for avenues to fill their inner vacuum, points out writer and palliative care activist K Aravindakshan.

The floods in Kerala this time has come as an eye-opener. Keralites opened a new chapter in social commitment, actively engaging themselves in difficult situations to provide help to the needy. Curiously, one of the most trolled persons in the season of floods was an astrologer who, out of his error in judgement , had forecast deficit rainfall this year. That came as a knockout punch to those who were after superstitious engagements.

In fact, the expression of voluntarism that was visible during the flood relief operations is a collective slap on the neoliberal ethos with its indiscriminate focus on individualism, Prof Kannan says. One of the key challenges of Kerala in the-post floods era will be how it will consolidate this resurgence of solidarity among the people. As the waters of the floods recede, expectations are on the rise – for a more just society.
No comments Posted in Kerala Floods Update